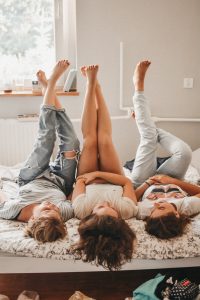 In my work as a therapist in Washington DC at The Sibley Group and throughout my career, the main population I have worked with are adolescents and their families. This period of life can be very challenging for everyone involved, from the adolescents themselves, to their parents, to school staff and so on. It is not uncommon for me to hear groans when colleagues ask who I mainly work with, as adolescents do not appear to have the best reputation. And there are some very good reasons for that as we will see.

In the next several blog posts, I am going to talk about adolescence, what it is and what parents can do to get through it as unscathed as possible. I hope to give context and understanding along with how to best parent.

So to start off, what is adolescence?

Adolescence begins around the age of 10 and lasts until age 19. According to Robert Sapolsky who is a professor of biology and neurology at Stanford University, there is nothing about adolescence that can be understood without understanding brain development in adolescence. The frontal cortex of our brain is delayed in development in relation to the other parts of our brain during adolescence. Why is this important to know? The frontal cortex houses our executive functions which include self-discipline; emotional, verbal, and/or behavioral self-control; patience; organization; self-monitoring and flexibility. So this is an extremely important part of the brain that is relatively underdeveloped during adolescence with full maturity coming around the mid-20’s

Stats to know about this time of our development from the psychologist Alan Kazdin:

Sapolsky also conveys that this lack of executive functioning contributes to adolescents having two to four times the rate of pathological gambling as do adults and teens having a frantic need to belong which produces a vulnerability to peer pressure and emotional contagion and such pressure is typically “deviance training”.

It’s a wonder how any of us make it out alive! I often joke with the parents that I work with that adolescence and teenage years are a more mature version of the “terrible twos.” A period of time when we furiously react towards restrictions on our freedoms, although this does happen throughout our lives. While there is no perfect way to get through it, there are strategies we can take to get through it as unscathed as possible, which I will talk about in my next blog. One thing to remember though, as the psychologist Robert Cialdini expresses, “imposing traditional parental authority at these times is often counterproductive; the teenager will sneak, scheme, and fight to resist such attempts at control.”

Now, adolescence is not all as bad as the above makes it sound and my reasoning for conveying this information is to normalize these things which you might encounter as parents of adolescents. In my experience, when I inform parents that studies have shown that “approximately 30 to 40% of ten and eleven-year-old boys and girls lie in a way that their parents identify as a significant problem” it helps parents to adjust expectations and know that it is not just their adolescent who is exhibiting these behaviors, and in fact, it may be more normal than not. That does not mean we condone these behaviors but that it also does us no good to overreact to it.

Kazdin, A. E. (2008).  The kazdin method for parenting the defiant child; with no pills, no therapy, no contest of wills.  New York, NY: Houghton Mifflin Harcourt Publishing Company.