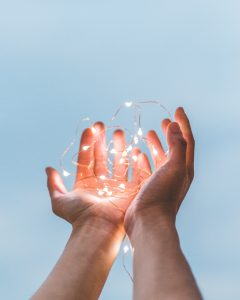 Like most of you, I’ve been spending a lot of time at home watching tv since there are only so many entertainment options during wintertime in the middle of a pandemic. One of my favorite shows that I’ve discovered during quarantine is Ted Lasso – I highly recommend it if you haven’t watched. It is heart-warming and family-friendly. It is hard not to feel better after watching the always-optimistic and generous main character Ted win hearts and attempt to beat the odds, which are highly against him as an American Football coach leading an English football (soccer) team.

In the show, there is a phrase that is common among the football fans: “It’s the hope that kills you.” Booing and heckling their own team seems to be pretty routine for them. The fans have developed their own philosophy on how to cope with rooting for a team that probably won’t win a championship: just don’t have hope, and that way you won’t be disappointed. Brilliant right?

…Wrong! This might be the attitude of the fans, but the hero of the show is the epitome of why it is good to have hope, regardless of what happens. Ted is constantly showing patience and grace when people criticize him, generously offering gifts to his team and colleagues, showing respect to the assistants and servers and anyone he comes in contact with – by the end of the season, the whole town seems to know and love him. In his culminating speech of the season, he asserts that it is, in fact, the lack of hope that kills you. Facing a team that they are unlikely to beat, careers on the line, Ted asks his team, “Do you believe in miracles?” And the team, which started out in disarray with players detesting each other, comes together with such positive energy around Ted.

I won’t give you any spoilers about the outcome. In fact, the whole point was that the outcome isn’t what matters the most anyways, even though of course we want our team to win. Whether you win or lose, the ride is determined by the mindset you have getting there. Hope won’t guarantee success, and yes, you can be hurt and disappointed when your hopes are high and you don’t achieve what you wished for. And yet, how pleasant is a win if the whole way there is negative and stressful? Nobody aspires to be the pessimistic fan throwing insults at Ted (although it is a little amusing); we want to be like Ted, win or lose.

There’s actually some good science behind why having hope is helpful for us, from both a health and an outcomes perspective. Hope acts as a buffer to stress and also makes us more likely to make behavioral changes that will lead us towards our goals. Hope literally makes us feel better and improves our chances at getting what we want. When we visualize, write down, or speak our goals, we are statistically more likely to take action to achieve them. In The Anatomy of Hope, Jerome Groopman cites scientific research as well as case studies with soldiers and chronically ill patients, and writes that hope can actually act like our body’s own natural form of morphine, by causing the brain to block pain and release endorphin and enkephalins.

Some of you might be wondering: But how can we be hopeful when things are so awful?  Working with clients through the pandemic- a time of both chronic and acute stresses – and going through intense stressors of my own, I am constantly challenged to keep a positive mindset and to encourage my clients to remain hopeful too. While things are so difficult, sometimes it helps to think of hope from more of a Buddhist perspective: using non-attachment. It might sound contradictory to hope for something while remaining non-attached to it, but it is a pretty liberating concept, and we really can allow space for both feelings.

Here’s what that looks like: that means picturing and writing down the things we hope for, talking with loved ones about our hopes, allowing ourselves to experience the positive emotions involved with having hope… and also practicing acceptance of things we cannot control, realizing that whatever happens we remain in control of our mindset, and incorporating self-compassion if we fall short of goals. Hope does not mean rigid expectations, it just means allowing ourselves to recognize what we wish to have happen, which means coming from a place of worthiness. Brene Brown talks about similar concepts as whole-hearted living – having hope is part of being vulnerable (it takes courage), and being vulnerable is part of being whole.  It is really hard to be vulnerable and to keep hoping when we have been through trauma, failures, or shame experiences; and yet, it is our best way forward, both for our journey and for our potential destinations.

TSG Therapists are here for you! While our offices are closed for the health and safety of our clients and staff, we are providing Virtual Services to our clients of all ages during this difficult time. Please click here to learn more about our tele-therapy options and short-term, specialized offerings for help coping with the pandemic.